No one knows exactly when two-up was invented, but the best guesses put it somewhere in the late 18th century. It may have developed from a game called pitch and toss, which was popular in England and Ireland in the 1700s. As convicts were sent from England to Australia during that time, it is thought that they developed their own for of pitch and toss which was later referred to as two-up.

It was also played by Australian soldiers during World War One. While it was illegal to play in Australia at the time, it was not illegal on Anzac Day. Anzac Day celebrated Australian and New Zealand soldiers who had served and died in the various wars that the two countries had been involved in.

Through the 1900s, illegal gambling operations of two-up were all over Australia. One of the biggest was Thommo’s Two-Up School which rang around Sydney from the early 1900s until the late 1970s. It was actually one of Australia’s biggest and first gambling outfits.

Though it saw a dip in popularity in the 1950s due to other types of gambling becoming popularised, it saw resurgence in the 1970s with its legalisation under certain circumstances and certain venues. 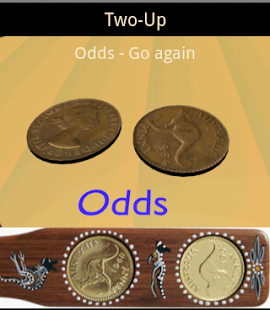 The spinner is the person who throws both of the coins up into the air. When there is a group of players, they will take turns being the spinner. The boxer is the person who takes care of all the better and gameplay. They are not allowed to bet. The ringkeeper or ringy is the player who makes sure the coins don’t get lost or tampered with. A kip is a piece of wood that the coins are put on for the toss. Heads means both of the coins have landed heads side up. Tails means both of the coins have landed tails side up. Odds is when one coin lands with the tails side up and the other lands with the heads side up. Odding out is when five throws in a row result in odds. Come in spinner means all bets have been made and the coins are ready to be tossed. In the past, there was also a person called a cockatoo. He or she served as the lookout for the police as the game was illegal until it’s legalisation on ANZAC day in the 1930s.

Uncovering The World Of 777 Casino