The St Jo Frontier Casino is the second smallest casino in Missouri and was located on an appropriated riverboat called the Spirit of St Joseph. The casino was one of the original four casinos that opened after Missouri legalized riverboat gambling in 1993.

When it first opened in 1994, the casino took over a small riverboat that operated out of Riverside Park. Initially the casino did not have a licence to have any slots, and only offered a few card games. The riverboat used to go on excursions up and down the river, whilst still offering gambling, which caused some jurisdictional issues with next door Kansas, who had not legalized riverboat gambling. In 1994 Missouri voters voted to legalize slots as well as card games.

Two years later more legislature was passed that stated that riverboat casinos did not have to travel the river, and in fact could even be within 1000 feet of the river so long as the river water touched them. Many Missouri casinos then became Boats In Moats, i.e. riverboats encased in concrete basins full of river water within 1000 feet of the riverbank. The St Jo Frontier Casino underwent its second incarnation during this time when its owner William M Grace built an $18 million 18 000 square foot boat in a moat three miles from the original location of the Spirit of St Joseph. Grace died in 2005, and the casino was sold to Herbst Gaming, who also bought other Grace casinos in Missouri and Iowa.

Today the casino floor holds 556 gaming machines including slots and video poker machines. The casino is not a huge one, and could never compete with big land based casinos of Las Vegas or Reno. The casino floor is only 32 000 square feet and offers four varieties of table games; Craps, Roulette, Blackjack and poli poker. The casino is also not open twenty four hours a day, and closes at 2am on most days but at 4am on Saturdays. Slots vary from penny slots to big 3D high definition games with extra bonus rounds and jackpots.

A loyalty program is available to join at St Jo Frontier Casino, its membership is free and it is open to everyone. The program works on a tier system, where you earn points through playing various games to advance up the levels. Each tier comes with different bonuses, like access to cruise ship specials or exclusive tournaments. Other promotions are always on offer at St Jo Frontier Casino for non club members too. Cash back, special discounts and meal vouchers are al up for grabs daily weekly and monthly. 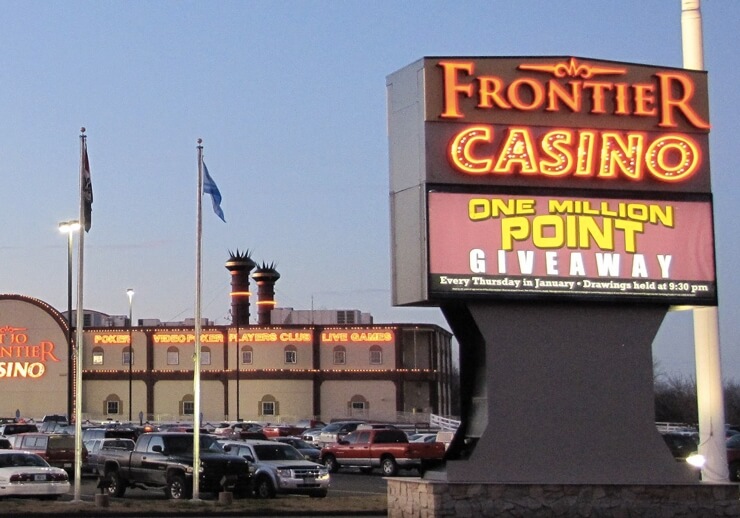 St Jo Frontier Casino has only one restaurant that offers an al la carte and buffet menu. They are open seven days a week for breakfast lunch and dinner. Cuisines range from Mexican to Italian to Asian and American and specials can be found weekly. Live Entertainment is occasionally provided in the form of either music or live acts such as comedians.